Brandy Zwicker received her Bachelor of Science degree in Nursing (BSN) from Montana State University-Bozeman in 2009. She began working in the oncology unit, caring for patients with terminal cancer. Brandy explained, “As a new graduate, I was intimidated to care for patients with terminal cancer diagnoses and end-of-life patients. As I grew in my nursing practice, I grew as a person, and my evolution from a timid nurse to a confident advocate of cancer patients was inevitable. My passion became evident within myself, to those I cared for, and my nursing peers. My heart to serve not only the patient’s medical needs but the patients’ and families’ emotional needs as well has been, unequivocal.” 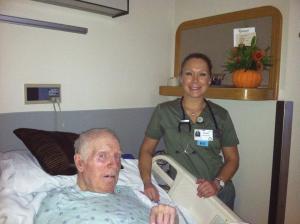 Over the past decade, Brandy has cared for hundreds of end-of-life-patients, and she feels that it’s a genuine privilege, not just a career. Her father, Gordie, was only 67 when he was diagnosed with terminal lung cancer. Advocating for an increased awareness of lung cancer is extremely important to Brandy Zwicker, especially given the fact that according to the Centers for Disease Control (CDC) CANCER was the second leading cause of death in the United States in 2017 behind heart disease. Lung cancer is the leading cause of cancer deaths for both men and women annually.

Brandy Zwicker continued, “As a nurse, I’ve felt just how frightening a cancer diagnosis can be and to consider the consequences of cancer is devastating! Many people are reluctant to go to their doctor for fear of the worst possible diagnosis and may hesitate to seek care. This was true for my dad; hoping for the best while at the same time feeling that nagging fear. I suspected my dad had Chronic Obstructive Pulmonary Disease (COPD) as a result of his smoking history with a strong suspicion that he had lung cancer too. I spoke with him about both on occasion. I asked him if he would go in and have tests to check for both and he would tell me that he would “die” when the good Lord saw fit. It was his fear of the diagnosis that inevitably snuffed out his beautiful life.”

After thinking he was suffering from pneumonia, Gordie was diagnosed with late-stage lung cancer; in the hospital for only three days, with his family by his side, he died from this harrowing disease.

Brandy despondently stated, “My dad, Gordon Joseph Suda, is forever lost to this world because of his fear of lung cancer.” Brandy Zwicker was nominated to represent North Dakota in Washington D.C. as a Lung Force Hero, where she asked for additional funding for lung cancer research.